Adapting to climate change requires an understanding of potential hazards and exposure. These Municipal Snapshots provide easy access to information about the people, places, and assets that are at risk from climate impacts in each of New Jersey’s municipalities.

Summarizes the potential flood exposure of built infrastructure on which the community relies for services including wastewater treatment, energy generation, and transportation.

The Infrastructure report for MUN_NAME

Summarizes the potential flood exposure of critical facilities and assets that the community needs to provide education, care, and public safety to residents.

The Critical Assets report for MUN_NAME

The Natural and Working Lands report for MUN_NAME

The Public Health report for MUN_NAME

The Vulnerable Populations report for MUN_NAME 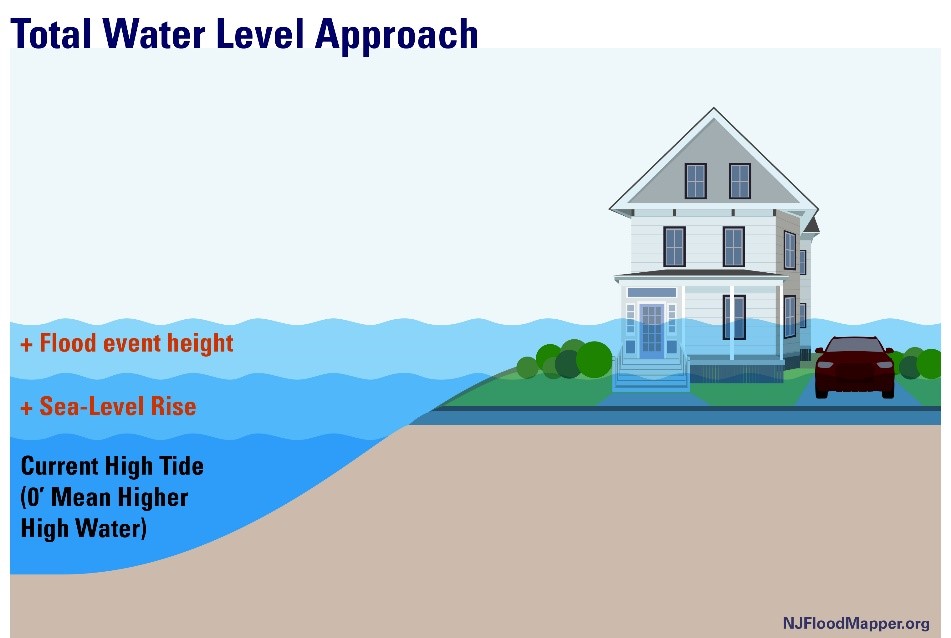 For the purposes of the exposure snapshots, different flood events are defined by total water levels (TWLs). TWLs present a height above high tide (See Figure A-1) that reflects the combined inundation from future sea-level rise and current flood events projected into the future from the year 2000 (Kopp et al., 2019).

Flood events1 can occur from surge created by a coastal storm (such as a hurricane or nor’easter) or from high tide each day as sea levels rise. For example, a 2-foot flood event along the New Jersey coast today can occur because of seasonal ‘high-tide flood’ conditions. By 2050, the same 2-foot flood events will become more frequent, occurring under normal high-tide conditions and inundating the affected areas2. While flood events resulting from daily tides will result in permanent inundation (i.e., the water will not recede), coastal storm induced flood events last only for the duration of a storm. A 7-foot flood event along the New Jersey coast that approximates potential hurricane storm tides today will become more likely in the future as coastal storm surge occurs on top of an increased baseline of sea-level to create higher storm tides. You can use our tools at (NJADAPT / NJFLOODMAPPER) to develop custom water levels for your region.